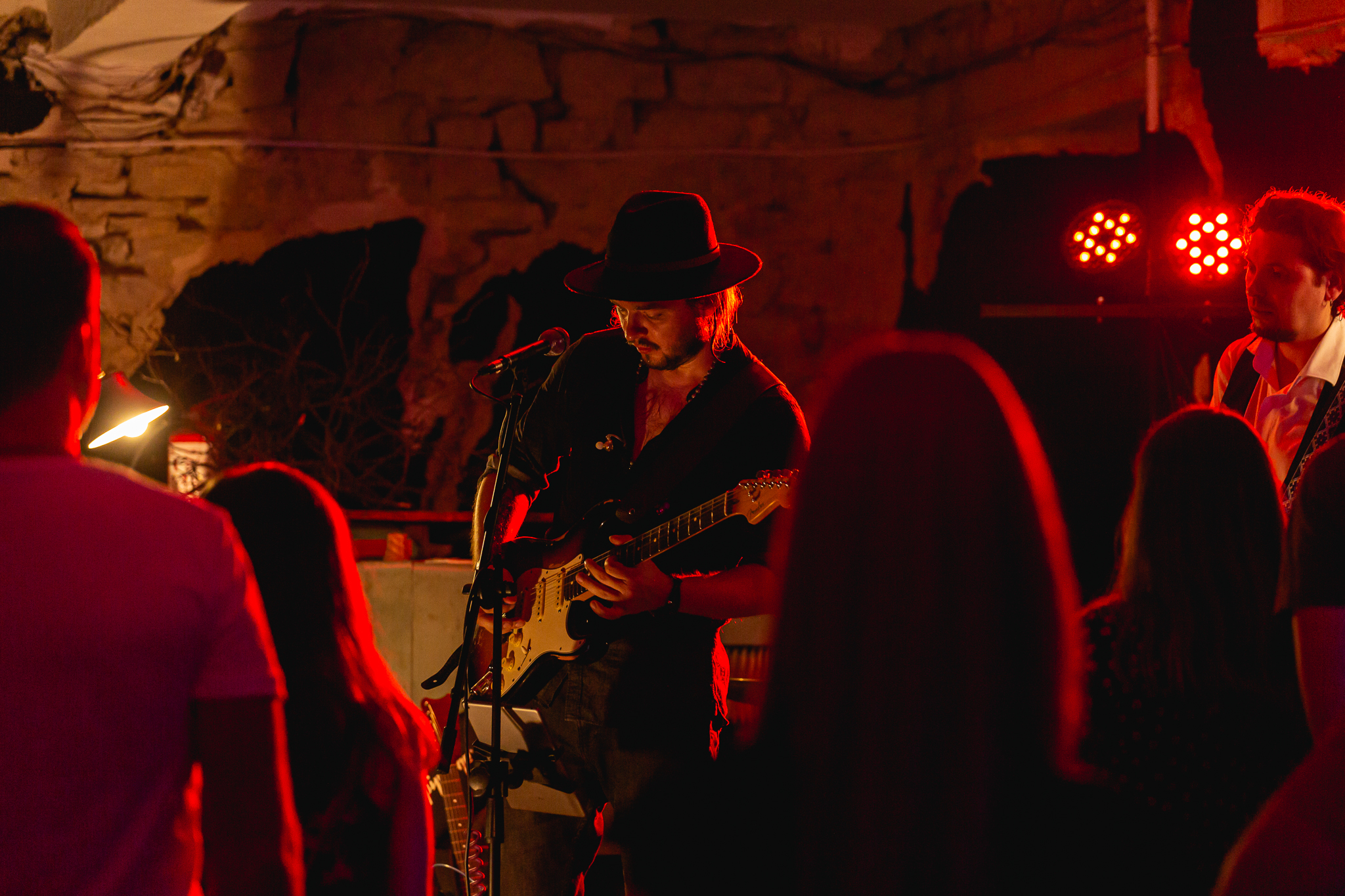 Searching For The Sun Tour 2022

The Heavy Crawls is a Ukrainian band that consists of Max Tovstyi (guitars, vocals, bass, keyboards, songwriting), Serj Manernyi (bass) and Andrew Vaschenko (drums) who replaced Tobi Samuel with the beginning of the war.
This band emerged from two-piece band earlier known as The Crawls. The history of the band started in 2013 when Max and Dasha Gavryliuk (former drummer) wrote and recorded their first song on the spot in two hours and after that they decided to release it and continue their way to success. Later that year they recorded LP album that was released both on CD and vinyls, released music video and started touring all over the country. Their songs could l be heard on various Ukrainian radio stations, and their music videos and live concert videos can be seen on TV. The Crawls’ songs are also being broadcasted in Poland, France, Germany, Greece, Australia and USA.
In 2014 the band starts working on their second LP album, making two new music videos (one was filmed in Paris). In that year the band participated in numerous festivals in Ukraine also writing new songs for the second album.
In 2015 the album "Lie!" was released (LP and CD) on Nasoni Records label (Germany) just like the previous one. The band had numerous invitations to different countries to play solo gigs and festivals such as Celebration Days (FR) and others, but because of different points of views about the band's future between the drummer and guitarist they decided to stop playing together.
In autumn 2015, Max asked to join the band his former bandmate Iryna who played with him in his side bands such as Max Tovstyi’s Blues Association and 7 Inch Interstellar Locomotive and a new drummer Inessa. This inspired Max a lot to write new songs and after few rehearsals they recorded their debut single and changed the name to The Heavy Crawls. Just in few days they had got lots of invitations from promoters and created the biggest Ukrainian tour in the history of the band.
In 2016 the band finishes their third record and is planning their first European tour for spring 2017. THC signed up to Clostridium Records (Germany) to release new album on 180 gram vinyl and CD on Moon Records (Ukraine).
The bands' major changes happened in January 2017, when former drummer and keyboardist left the band. But they were quickly substituted by new members and the band was ready to tour and write new songs. The band hit the road and played in 10 countries.
It is necessary to say that the band was mentioned in Polish magazine Metal Hammer having a high mark and lots of other internet magazines like The Obelisk, It's Psychedelic Baby, Doomed and Stoned, BBC Ukraine, The Temple, Musik Reviews DE, Stoned Union Doomed, Everything Electric, Forkster and others. The album received high marks and good critical acclaim.
The Heavy Crawls played many festivals and played as support for Uli Jon Roth (Scorpions, Electric Sun), Yardbirds, Animals and Friends, Jan Akkerman in Poland.
The band was influenced by such bands as Led Zeppelin, Cream, Jimi Hendrix, Black Sabbath, Blue Cheer and modern bands such as Dead Weather, Tame Impala, The Black Keys, Dead Meadow, Brian Jonestown Massacre and others.
In 2019 the band line-up changed again with Serj Manernyi on bass and in early 2020 with Tobi on the drums. Because of the pandemic the band didn't have much gigs though they concentrated on studio work and perfomed online couple of times. In 2021 the band was back on track with the best line-up in its history and playing shows in different cities also performing at two festivals. The fourth album was recorded during 2020-2021 and after 16 months it was finished! Recorded using analogue and vintage gear, Studer B67 and RTM tape it sounds fantastic delivering nice sound for every audiophile! It was released on August, 2022 on CD and heavyweight marbled vinyl. The band hit the road again playing 9 shows in Ukraine also supporting Ukrainian army by donating some money from selling merchandise and playing charity concerts.

Searching For The Sun (CD)

Searching For The Sun (Vinyl)

© 2023 The Heavy Crawls. All Rights Reserved.
Produce by DDS

The cart is empty